Victoria and I Have A Little Secret 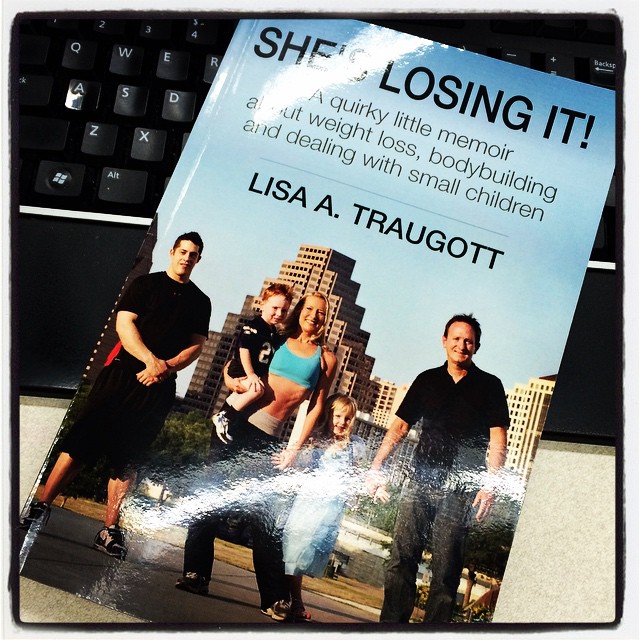 Did y’all see the Victoria’s Secret holiday show the other day?  Here’s a secret:  Victoria and I are frenemies.  I really liked the holiday special when I was 20-something and thinking, “Cool.  Sexy outfits my boyfriend can buy me.”  But then in my 30’s, looking at my sagging-everywhere-post-two-babies-body I thought:  “Put some clothes on, Vicki.”  (We are on better terms today.)

Plus, I can’t be too mad at her since I dangled the specter of a Victoria’s Secret model-type physique in front of my budget-conscious husband as justification for me to hire a personal trainer to enter my first bodybuilding competition two years ago, so it all worked out.  With that in mind, below is an excerpt from my new book, “She’s Losing It!” (available now on Amazon.com)

Hope you enjoy it! “What on earth were you two talking about that you stayed up all night?” Henri asked. He’s sitting on the couch, watching football, eating popcorn and drinking beer. We have the best popcorn ever. Two years ago I bought him an old-fashioned popcorn machine that uses coconut oil and it tastes like real movie popcorn, because we put a ton of butter and salt on it.

“Everything,” I said sitting down next to him. I’ve been in the office, working on my novel. Whenever I’m really trying to work through something I write. I put my characters in similar circumstances but in different time periods as me and then play “what if?” games. What if the leading man pushed her too hard? What if the leading lady stopped pretending nothing was wrong? Would things get better? Worse?

I begin to eat out of his bowl. “Who’s playing?”

“I hope the Giants win. Not only because they’re a better team, but also so I can soothe Tom Brady after the game in a way his supermodel wife, Gisele, never could.”

Without looking at me, Henri picks up a handful of popcorn and throws it at me, shaking his head. “That’s your outside voice, you know.”

We continue watching for a few minutes and I move a little closer and begin to kiss his neck. He shifts away a bit. “Honey, I’m watching the game.”

We watch in silence.

A Victoria’s Secret commercial comes on. The woman is impossibly thin and beautiful. I never cared about those ads, but I can’t help but feel inferior. Henri is leaning forward, drinking his beer.

“Henri, I know what I want for Christmas.”

“What?” he asked, slightly annoyed.

“Henri, my grandmother called. She wants her underwear back.”

“What?” That pulled him away from the screen.

“I’m entering a bodybuilding competition. I won’t be able to do it on my own; I’ll need to get a personal trainer who can give me a diet. I know the diet is supposed to be really intense or something, but I don’t know what they eat. I spoke to the manager and he said if I buy ten sessions they could give me a super discount and only charge me seven hundred dollars minus one hundred dollars for another side promotion, so it would only be six hundred dollars.”

“Six hundred dollars? Are you nuts?”

“Hear me out. That’s only sixty dollars per session. I can stretch out the sessions too. The competition—it’s called Shredder, isn’t that a cool name?—it’s in April, so if I start the training the same week as my birthday in February, and maybe do it every other week or something, I can stretch the sessions to last until then.”

He’s sitting with his arms crossed over his chest, pretending to listen and subtly shaking his head ‘no.’ Whenever I hear someone tell me ‘no’ it just means I’m not explaining it right.

“Don’t you want me to look hot in a bikini?”

That perked him up.

“Lisa, I used to body build in my twenties and the women who did it overbuilt their arms and looked like scary gorilla women.”

“That’s why I’m entering the bikini division. See, the point is to just look toned and soft. Like a Victoria’s Secret model.”

He is seriously considering the ramifications of that possibility.

“How did you even come up with this idea?”

“I have something to tell you.”

“You already signed up for this.”

“No. I took the last of my maternity check money and bought three trainer sessions and the lady, Chris, said she was going to enter the competition.”

“I didn’t want to tell you I did the trial session because I know we’re tight for money right now. But it was my money and I’d rather spend it getting healthy than just going out to Starbucks.”

“How come the maternity check is your money but the money I make is our money?”

“Henri, we’ve been through this. I went back to work when Rylee was three months old while you got to stay home, with the occasional babysitter who did the laundry, by the way, while I worked until Henry was born. I didn’t bug you about your money/my money then. Look, I don’t want to fight, I just want to lose weight and look good for my reunion, and what I’m doing clearly isn’t working. I ran the half marathon last year, I did the cayenne pepper lemonade cleanse, I tried Nutrisystem®, God you know I’m trying, but nothing is working, Henri.”

Available just in time for New Year’s Resolutions!  Only $15.99 on Amazon.com! Order your copy today!