Winning and the Elusive Pro Card 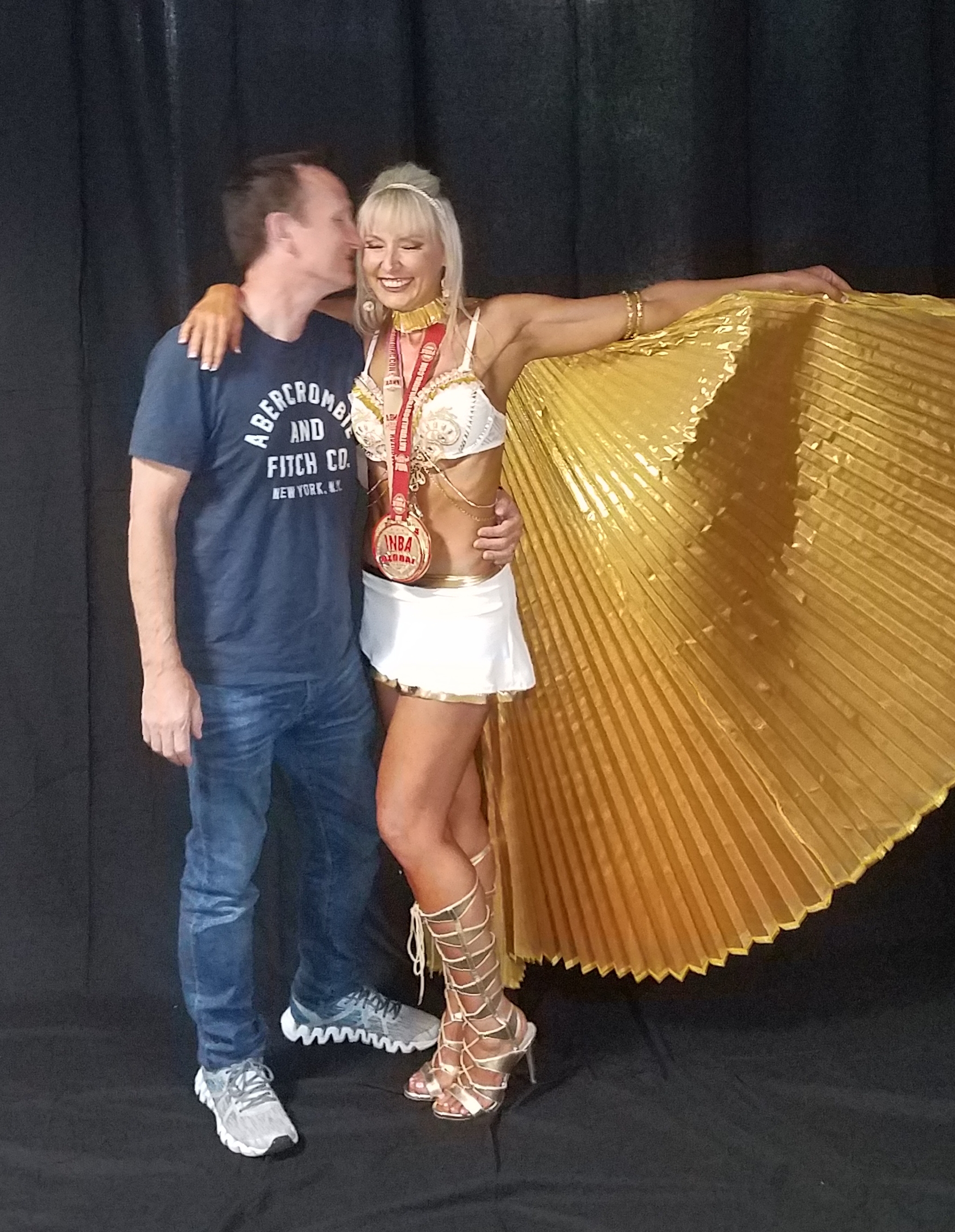 This past weekend was the INBA Urban Physique Naturals.  Every bodybuilding federation has their own feel and I like this one because it does WADA drug testing (the same tests required to compete on the Olympic teams) and because it has some interesting divisions you won’t find in other federations, such as disabled (divided into standing and wheelchair divisions), Baby Mama (for women who gave birth between 1-3 years ago) and Angels (for those of us who always dreamed of being a Victoria’s Secret model but lacked the million dollar contract).

That’s the division I won!

The Angels division.  I wore a white and gold costume and felt so powerful on stage.  Never underestimate the joy you get as a middle aged woman dressing up as a goddess and dancing with giant gold wings.  While this is not a dream of all women, it is now something I can officially cross off my bucket list.

Special thanks to Dez Raven for choreographing the dance for me.   And, of course, thanks to my long-time coach, Robin Johnson.

The second division I entered was open Sports Model, meaning I was competition against women of all ages for a chance to win a pro card.  For this one I wore black pants, black sports bra with gold accents and gold belt (the opposite of my first costume) and did a Ninja routine.  Like, seriously.  I went to my kids’ Tae Kwon Do school, Rise Academy, and their teacher, Nick Rivas, taught me how to do tornado kicks, hand blocks and over the shoulder rolls, plus I added in a few cartwheels and Aye-ya! shouts to be dramatic.  I also gave a speech about how fitness changed my life, going from borderline obese to the best shape of my life, encouraging people in the audience to go for it, because I am living proof that change is possible.

During pre-judging, they moved me to the middle for comparisons (a definite good sign) and at the night show I was the only contestant asked to give my speech again.  And then they awarded me… 2nd place.  The 1st place winner was tall, gorgeous and 22 years younger than me, so I guess I shouldn’t feel too bad, but I’m not going to lie – it hurt.  It hurt that I was literally doing backflips (ok, cartwheels) and still couldn’t get the damn pro card!

Now don’t get me wrong, a pro card is more of a status symbol at this point, because it means you can compete for money.  The money you win in natural bodybuilding competitions is usually about $200, so it’s not like I’ll be quitting my day job to be a bodybuilder, but it just seems so elusive.  I’ve won several shows but there weren’t five competitors in my division, so no pro card for me.

But getting 2nd place just makes me hungrier.  In hindsight I probably should have worn shorts instead of pants, but with as many kicks as I did I was afraid I was going to have a “wardrobe malfunction”.  Next time I’ll just wear shorts and glue them down with bikini bite.

On the plus side, I really felt like I connected with some women in the audience talking about my own weight loss journey.  My hope is that other people, especially moms, get inspired to get fit.  During the intermission my family sold copies of my book, “She’s Losing It!” and T-shirts that said Moms Kick Butt and Girls Kick Butt.

I’m still really happy with my Ninja routine.  Back in 2014 I had trained for a fitness competition with a similar theme (Ninja/James Bond Girl) but had to drop out two weeks before the show because my mom went in the hospital and I had to fly to NJ to take care of her.  Friday was the 3rd anniversary of her passing, so it felt like it was time to finally circle back and cross the fitness competition off my bucket list too.  I think my mom would have been proud.  We used to watch all the James Bond movies together and loved the way all the women kicked ass.

My husband took some videos of both the Ninja and Angel routines with his phone, but it doesn’t seem to want to exit his phone and go onto YouTube.  When it stops being temperamental I’ll post the videos.    Also, when I get the stage photos I’ll be posting them too.

HUGE thanks to my husband, Henri and kids, Rylee and Henry V, for cheering me on as I ate fish and asparagus and posed on stage in crazy costumes this weekend.  I’m lucky to have such a supportive family.  And thanks to all of you who sent me good luck messages.